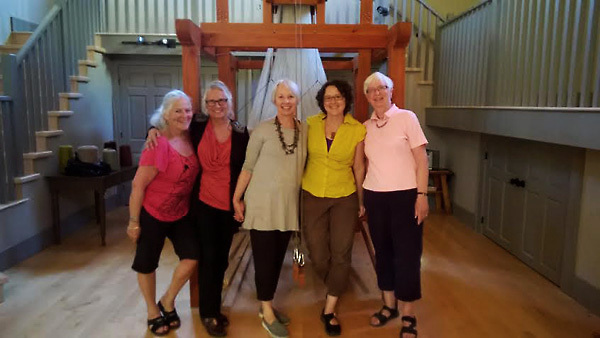 The story of a Peterborough weaver named Samuel Lowry and the restoration of his Jacquard loom a century after he disappeared is steeped in mystery. Ironically it was the very technology which allowed Lowry to become a successful independent craftsman that put him out of business as the Industrial Revolution steamrolled its way into the 20th century.

What remains is his loom, now on display as a fascinating permanent exhibit at Lang Pioneer Village Museum. There are only about 7 original Jacquard looms left in North America and 2 of them live at Lang. Rightly, the museum has invested a decade in meticulously researching and restoring this rare loom as well as a working replica, along with the construction of the S.W. Lowry Weaver’s Shop & Jacquard Loom Interpretive Centre to showcase them. Lang has conceived a rigorous and complex exhibit which is so much more than mere nostalgia, but a living history of a technology that continues to animate our culture and our world.

The intersection of low tech and high tech is fertile ground and the place where technology and creativity collide holds a particular charge. Nothing embodies this more effectively than a loom. Whether simplistic or digital, a loom is capable of so much diversity and potential within its design that the art of weaving spans the timeline of mankind’s history in virtually every culture. As early as 30,000 years ago hand looms began their evolution from a primitive set of sticks and some spun fibre into one of the defining machines that ushered in the Industrial Revolution. The invention of a mechanized loom which created repeat patterns via punch cards by Joseph Marie Jacquard in 1804 became the foundation of the computer technologies that drive everything in our world today.

Samuel Lowry was one of 10 children born to a Warsaw, Ontario shoemaker in 1862. It is no small feat that Lowry managed to acquire 2 looms as well as at least 2 Jacquard head mechanisms and learned how to set up and operate the extremely intricate machine. A basic weaver’s apprenticeship of that era could last up to 7 years. But the skills required to set up a Jacquard loom would multiply exponentially. Deborah Livingston-Lowe writes “… [another Jacquard weaver of the period named John Campbell] was no factory weaver: he was a weaver who displayed great versatility in his skills, producing custom textiles that ranged from the simplest flannel to cloth not readily producible by the home weaver on a piece of equipment that was and still is intriguing today, a machine standing eleven and a half feet tall that reads binary information from punch cards.” A proficient Jacquard weaver might dress their loom with a 60 yard warp and weave 5 – 10  yards a day to stay competitive.¹

Between 1888-1909 Lowry set up shop at several locations in Peterborough, the longest being at 172 Hunter St. His Peterborough Examiner advertisement read:

“Weaving! Rag carpet in white or colored warp, at reduced rates during the rest of the season. Plain and Fancy Flannel Blankets, etc. Ingrain Carpet in great variety of patterns, cheaper than ever before. Call and inspect.”   In the late 1800’s, Ontario’s economy supported over 2000 self-employed weavers. But Gemmel’s Carpet Factory eventually put Lowry out of business with 9 Jacquards and a stable of a dozen or more weavers producing a lucrative wholesale line of carpets for a region that stretched from Peterborough to Belleville.

Perhaps Lowry was something of an opportunist or maybe even a scoundrel. Perhaps he had a penchant for getting in over his head. He was sued for trifling with the affections of a Miss Ettie Wright who appeared in court “wearing a handsome black hat with black plumes and a grey Persian lamb shoulder cape covering a royal blue velvet dress.” He soon married a dressmaker named Eliza Campbell, whose brother was also a weaver.  They bore 2 children; then tragically, the couple lost an infant, the result of an accidental laudanum overdose. As his textile business began to decline, Lowry sought other employment at the Toronto Carpet Factory, Canadian General Electric, as a traveling salesman and a harness maker. Finally as a last resort he left his looms in the care of a Mr. Buller as payment for back rent, and headed west, ostensibly to find a new career, never to be heard of again.

The loom languished in storage until 1967 when a local weaver named Dini Moes acquired the loom and in 1973 donated it to the museum.

A remarkably clever and dedicated team of women spearheaded the restoration, each with a different approach to the project. For Lois Watson, it was researching stories of how people lived their lives in this community that brought the project to life.  For Audrey Caryi the Centre was another piece of the puzzle that makes up the Lang village.  The project gave her the opportunity to exchange knowledge about the loom with people from around the world via the very technology made possible by the Jacquard.  Wendy Cooper loved the challenge of solving this Rubik’s cube and figuring out “how the darn thing works.”  The indefatigable Faye Jacobs enjoyed the hands-on challenge of harnessing and bringing the loom back to life. Laurie Siblock, Assistant Manager at Lang, noted the satisfaction of her contribution to “a cascade of problem-solving.”  Lyn McGowan, Christine Muir, Rhonda Akey, specialists from the Ontario Science Centre, the Henry Ford Museum and members of the Peterborough Hand-Weavers’ and Spinners’ Guild also contributed to the loom’s resurrection.

Just as early computers and software did not conform to a single os, Jacquard looms were idiosyncratic and not built to one standard or gauge, so the reconstruction was both painstaking and time-consuming.

A work of art and an engineering marvel, the restored Jacquard will be officially launched in conjunction with Lang’s Textile Traditions Days events from August 13-15, 2015. Specialized workshops and demos make the museum one of the best places in the area to get hands-on experience with advanced textile knowledge and skills.

Other delights at Lang include a working flour mill on the river, a delicious collection of steam punk farm equipment of the period, a print shop featuring several types of printing presses and events such as Christmas by Candlelight complete with horse drawn sleigh, gingerbread and the soft glow of firelight on a snowy night. Extensive school directed programs as well as some advanced textile workshops make it a rich environment for experiential learning.

We can choose to weave on a primitive frame loom, or on one with individual warp threads manipulated by an arduino-controlled computer – and both remain relevant today. What fascinates me about the loom is that it simultaneously represents history and the most immediate present day technology, while never losing the soulful quality of the handmade object. Samuel Lowry’s restored Jacquard is a true gem that makes all that come alive.

The History of Samuel Wallace Lowry and His Looms by Lois Watson, Peterborough Handweavers & Spinners Guild, The Lang Register, Spring 2011 Vol. 4, No. 1

An in-depth thesis focusing on the career of weaver John Campbell, a contemporary of Lowry, whose Jacquard loom has been restored at the Ontario Science Centre:
¹Counting on Customers: John Campbell, 1806-1891, Middlesex County Handloom Weaver by Deborah Livingston-Lowe

Burnham, Harold B., and Dorothy K. Burnham. Keep Me Warm One Night: Early Handweaving in Eastern Canada. Toronto: U of Toronto in Cooperation with the Royal Ontario Museum, 1972.

Meet the Makers of Peterborough & the Kawarthas

The series of videos Meet the Makers of Peterborough & the Kawarthas
has been launched, featuring Faye Jacobs and the S.W. Lowry Weaver Shop
and Jacquard Loom Interpretive Centre At Lang Pioneer Village Museum!

Lang Pioneer Village Museum was established by the County of Peterborough in 1967 to celebrate and preserve the rural history of the area. Each year, tens of thousands of visitors from around the world take a trip back in time to discover how the pioneers lived. Nestled along the banks of the historic Indian River, Lang Pioneer Village Museum features over twenty-five restored and furnished buildings constructed between 1825 and 1899. The Village is complete with lanes and pathways, farm animals, rail and stump fences, vegetable and herb gardens, as well as other authentic details of a 19th-century hamlet. Villagers of all ages, dressed in authentic historical costume, go about their daily chores contributing to the authenticity of this living history experience. Sparks fly from the anvil in the blacksmith shop, handbills are printed on the old press in the Register Print Shop and the gentle smell of wood smoke fills the air. Chat with the Village carpenter at his treadle lathe or the spinner at her wheel and visit the 14-room Keene Hotel for lemonade or afternoon tea.

The newest addition to the Village is the S.W. Lowry Weaver Shop and Jacquard Loom Interpretive Centre, home to two of only a handful of authentic Jacquard looms that can be viewed in North America. The Interpretive Centre serves as an exhibit and educational area and features a fully-operational loom and demonstrate the step-by-step process of how fleece from a sheep becomes a woven fabric.